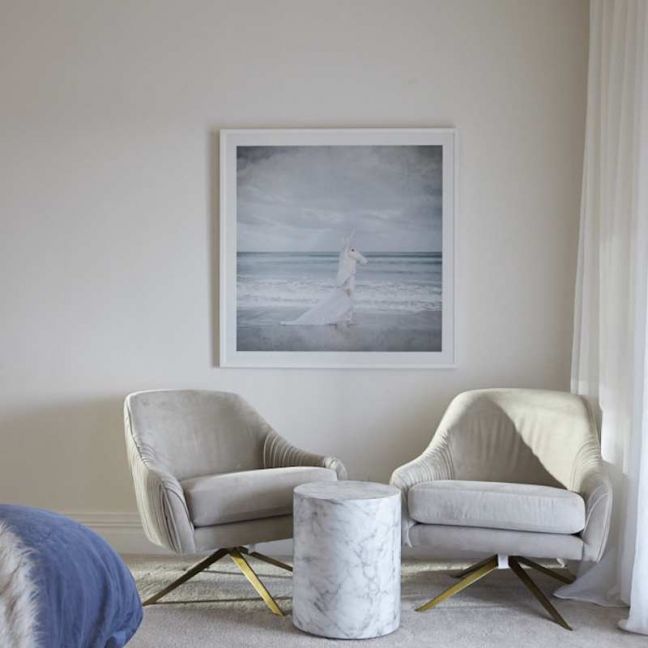 St Kilda’s Oslo Hotel is getting a makeover on this season’s The Block, and the infamous rebel couple Jesse and Mel have selected a large Unicorn artwork to feature in their renovation. The artwork – made by Polish-born Australian artist Aldona Kmiec, who now lives and works in Melbourne and Ballarat  – is part of a collection of limited edition prints, available for purchase directly from the Artist here, from The Block Shop and Art Lovers Gallery.
From a series called ‘Dreamscapes’ photographed in 2014-15, Unicorns Are Real captures the free-spirited personality of one of the artist’s close friend, Kirsty Hawkes, a Warrnambool based artist. Having grown up surrounded by conflict and hardship, Kmiec says that her creativity and imagination saved her from being paralysed by grief.

“When I was a child there wasn’t any money for anything extra like newspaper or magazines, and every cent we had was spent on necessities” says Kmiec.

“The first photographs I ever saw were ones from the family album after the WWII that my Grandmother kept hidden in her handbag. I would ask her everyday to tell me stories about them.” Kmiec says this desire spurred her imagination, and was developed as a survival mechanism.”

Aldona Kmiec has exhibited her work throughout Australia, Poland and the UK. While thrilled to have one of her art photographs featured on TV, Kmiec hopes to inspire viewers’ curiosity in the power of photography as a medium for self-expression.
‘Unicorns Are Real’ artwork featured on The Block and other limited edition prints are available for purchase from directly from my Artist shop here and The Block Shop here.
*Watch Jesse & Mel’s Master Bedroom room reveal with Aldona’s Unicorn artwork on The Block this weekend.
Contact information
For further information contact the artist:
Aldona Kmiec+61 433 162 791
info[at]aldonakmiec.com