Having used the Elinchrom Ranger Quadra for a few years now, I thought I’d share some thoughts on the gear and offer some suggestions who it’s best suited for. For those that may be unfamiliar with it, the Quadra is a portable battery-powered strobe with an available flash output of 400ws for those that don’t need high output but demand more power than off-camera flash can offer. Ranger Quadra portable system hits the sweet spot on a number of factors: 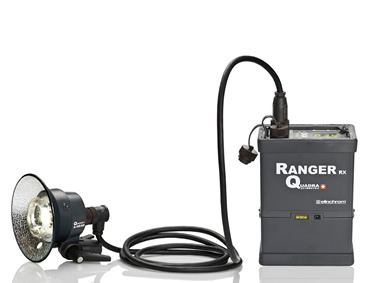 I usually get through a full 2 hour shoot (around 300 shots) running the unit at 1/2 to 2/3 power with slow recycle mode enabled (which increases battery life) without draining the battery. As an added bonus Quadra can run while plugged into the outlet so you’re always covered when shooting in the studio (best avoided to maintain good battery life).

Ranger Quadra has a couple of other attributes that make it a very attractive package:

As a blend of power, performance, portability and price, the Ranger Quadra is really in a league of its own. With the addition of the Li-Ion battery, it creates a solution that can easily be packed into an airplane carry on luggage. If you often shoot outdoors or on location more often then in the studio, the Elinchrom Ranger Quadra should be in your bag.